Phoenix is a well known customizer creator among the AFOL community. His customizations are created starting from official pieces and are screen printed with the LEGO procedure. You can find all his creations on his website phoenixcustombricks.com.

This review is written in collaboration with the HelloBRICKS Website. Our friends are currently publishing an Adam de PhoenixCustomsLLC exclusive interview, available by clicking on the banner hereunder.

The figurine I’m going to present to you is issued the  Star Wars : The Force Awaken film premiered on December 2015 in theaters.

The figurine will be available on Phoenix website in few days at 65 USD, I’m lucky to have received it in advance as long as I pre ordered it few months ago, thus I can write you this exclusive review before its official release.

Luke Skywalker is the Star Wars original trilogy (episodes IV to VI) main character. He is Anakin Skywalker and Padmé Amidala’s son and Princess Leia Organa’s twin brother. He was born in 19 BBY in Revenge of the Sith. He will become a Jedi knight and will be a rebel alliance hero during the galactic civil war in The new hope, The empire strikes back and The return of the jedi. Three decades later, he is the last alive jedi and went into exile on a remote planet.

He is portrayed by the actor Mark Hamill.

As an exclusive figurine oblige, Phoenix provides his creation in a black cardbox, an undeniable qualitative asset comparing to the traditional plastic bag.

Inside the cardbox, the figurine is protected with a plastic bag and filmed with a fiber sleeve protection. The cloak is set behind the figurine.

Even if it is not the most original screen print I have ever seen due to the original costume/tunic which does allow any fancy fioritures, the figurine is nevertheless really accurate and really close to the movie (see picture above). The realisation is really realised with a high quality crafting.

Pants and costume colours and shades are almost perfect and the screen prints are perfectly lined up.

The face has also white spots/patches in the beard and Luke‘s age is well displayed. Yet, extra white hair strands would have reached nirvana.

In the back, we have the head sobriety. No current/present alternative face.

No additional screen prints on the sides of this customized figure. The chromium hand is really well crafted, the chromium plating is perfect.

Zoom on the robotic chromium hand.

A new figurine success from Phoenix, his creations are becoming more and more beautiful and his techniques almost rival with LEGO’s official production ones.

His customizations are still quite expensive, even really expensive for some people, yet, you get value for your money regarding the undeniable quality of the figurine realization which is provided. 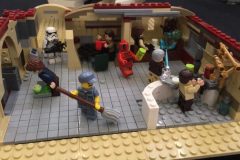 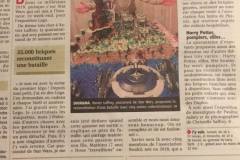